If You Ask an Astronaut a Question 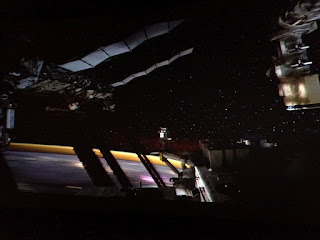 The Space Station flying over earth (beautiful!)
Yesterday was a pretty normal day, except for the fact that I got to see and speak with an astronaut!! (can you tell that I am still geeking out about this?)

This opportunity came about because the CEO of my company went to boy scouts and high school with Gregory Johnson (the astronaut). Seriously, he really did! What’s even cooler is that Johnson took a small piece of our company up into space with him, and yesterday’s event was scheduled so he could return the item to us. :D

Before we get into the presentation, here is some information about Gregory Johnson:
Gregory “Box” Johnson is a NASA astronaut and a retired colonel in the US Air Force. He has flown on two space flights (STS-123 and STS-134) with the Space Shuttle Endevour, where he served as a pilot. On the STS-123 mission, the team delivered the Kibo logistics module and the Dextre robot arm to the International Space Station. During his second flight (STS-134), the Endevour installed the Alpha Magnetic Spectrometer (AMS) and the ExPRESS Logistics Carrier on the Station. 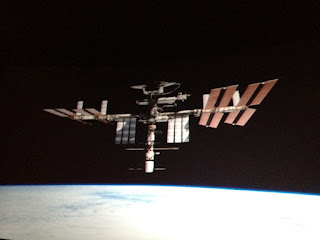 The only image of a space shuttle docked with the International Space Station.
At the appointed time, the majority of my company made its way over to the AMC theater for Johnson’s presentation. He started off by putting this picture up on the theater’s screen, which is a Star Trek remake of him and the space ship crew he most recently flew with (Johnson is the first guy to the left of center): 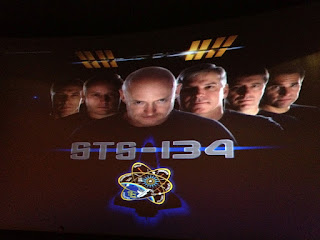 Johnson told us all about his most recent flight, which was also the last space shuttle flight for NASA. He described the tasks that needed to be completed, the people he got to work with, and so many other fantastic details that you can only learn from first-hand experience. As he was talking, he showed us lots of pictures (see below) and a fun video that he called the “home video” of his STS-134 mission.

Some images Gregory Johnson showed (please note that these are pictures of pictures on a movie theater screen): 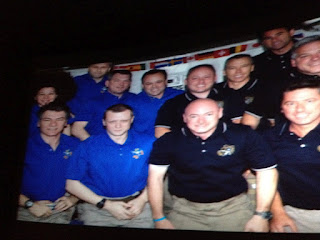 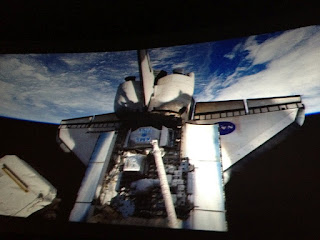 Getting ready to unload 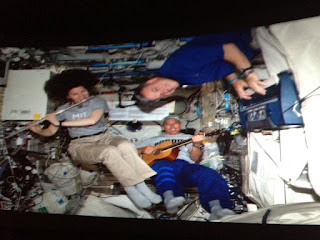 The first band in Outer Space! 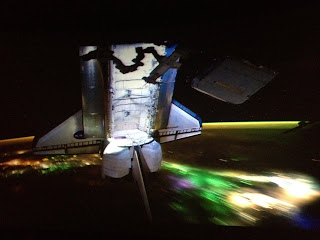 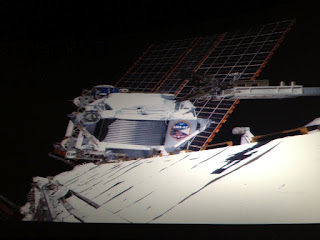 The Alpha Magnetic Spectrometer on the Space Station
After his presentation, Johnson opened the floor for questions from the company. Since the original microphone for the individual questions wasn’t working, our CEO decided to be the microphone runner and passed his microphone around to everyone who had a question. (We all thought that was a cool thing for him to do) Some of the questions included: “What is NASA going to do next?”, “Will we go into space outside of the NASA program”, and more.

After about the third question, I decided that I wasn’t going to miss an opportunity to talk to a real astronaut and raised my hand. :) Getting handed the microphone was seriously nerve-racking, but I knew I would regret not taking advantage of such an opportunity! My question to Gregory Johnson was, “We all love the space program, but were there any particular events, people, or anything else that inspired you to become an astronaut?”

His responses were priceless! The first thing he mentioned was seeing Neil Armstrong walking on the moon when he was 7. He said he had continued encouragement as he was growing up from his 7th grade math teacher, his high school music teacher (who also taught our CEO), and other mentors. He talked about how amazing it was for him to meet Neil Armstrong in person a few times, and finally, how one of his most prized possessions is an email that he received earlier this year from Armstrong (before he passed away.)

The final question for the afternoon was “Are you ever scared of getting hit by an asteroid while you are up there?” LOL It was a hilarious question, but Johnson’s response was even better. He said that on his first mission, a small piece of space junk actually hit one of the space shuttle windows! It made a good-sized dent in the glass, but did not break through the first layer of glass. How crazy is that?! Johnson also said that space junk is a real problem up there. Most of it is fairly easy to track, but he hopes that someday we (or our children) will come up with a way to dispose of it.

Overall, I would consider this one of my experiences of a lifetime! I loved seeing the photos and video, and having him respond directly to me was outstanding. Remember – if you ever have a chance to see and speak with an astronaut – do not hesitate to attend! :)