Four Wineries and a Cache 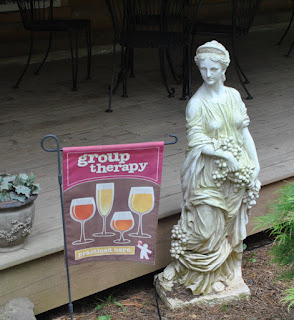 Recently, Dan and I got to take his cousins, Denise and Raul, for their first a wine tasting day. :)

After looking through all the places we wanted to visit, we decided on Hidden Brook, Lost Creek, Fabioli, and Breaux. Hidden Brook and Lost Creek were on the list because I had found coupons for them on Specialicious a few months ago. Dan had heard cool stories about Fabioli, and since it was close, we added it to the roster. Finally, I picked Breaux because I have tried some of their wines at Wegmans and because I heard their grounds were beautiful.

Hidden Brook Winery
At our first stop, we found the log cabin tasting room nestled on a woody plot off of Route 15. Being the first visitors of the day, the staff was very friendly and eager to tell us all about the wines, owners, and cabin. They were also interested in Dan and I’s geocaching trail and happily gave us some corks to add to the cache we hid there.

Hidden Brook offers lots of sweeter wines, which were great for our newbies and me, though they also had a nice rich red that caught Dan’s attention. We were quick to ask for bottles of Reserve White and Merlot to take home with us.

Our favorite thing about Hidden Brook was learning about their Charagrittas, which are Chardonnay margaritas. All four of us recommend getting a Charagritta when you visit! 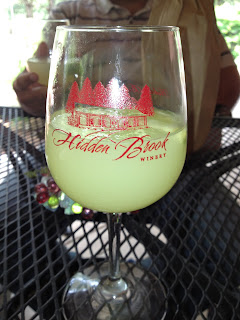 Lost Creek had a good selection of both red and white wines, and each of us found at least one wine that we really enjoyed. We also learned that Lost Creek had started the idea of Charagrittas, and we were able to try a glass of theirs, which was deliciously refreshing. I also got to talk with the manager about geocaching, and she was more than willing to let us hide a cache on our next visit. :)

While enjoying glasses of Charagritta, we sat down on the patio with some fresh bread and olive oil. The grounds at Lost Creek are beautiful! They have both outdoor and indoor seating, and even a couple open fields that would be great for picnicking. After seeing all the dogs relaxing next to their owners, I realized that they were dog-friendly, and I am looking forward to going back with my puppies soon. 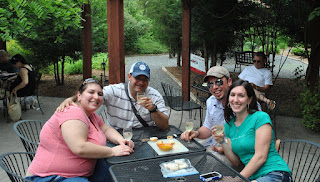 Fabbioli Cellars
Our third stop lay a few miles down Route 15 at Fabioli Cellars. The tastings take place in the basement of the owner’s home, which has an outdoor patio coming off of the basement.

I knew I would like this vineyard when I learned that they offer savory and sweet food pairings with the wines. Most wineries do not offer food pairings. In fact, this is only the second winery where I have seen it as a standard practice. It is a brilliant idea though. I enjoy tasting the wine itself, but I love seeing how flavors can grow and enhance with the right pairing of food.

Another unique feature of this vineyard is their Pear in a bottle. Yes, you read that right! This vineyard also grows pear trees, and some of those delicious pears are actually grown inside of a wine bottle! It really is the coolest thing to see. The specialty pear-in-a-bottle bottle is quite expensive, but I think it would be an awesome gift to give for a big anniversary.

Before heading out, we picked up bottles of their Aperitif Pear Wine and Raspberry Merlot. 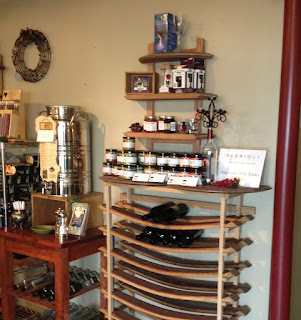 Breaux Winery
Our final stop for the day was Breaux Winery off of Route 9. As many reviews have said, the grounds at Breaux are beautiful. If you want to have a wedding at a winery, this would be your ideal setting.

The facility looked pretty busy, but we found an opening at the counter and lined up for a tasting. While there were a fair number of wines in the tastings, we were disappointed that some of the wines we had really wanted to try were not available for tasting.

The other thing that we found disappointing was our server. While most servers at VA wineries are friendly and happy to answer questions about the wine and facilities, the server we had at Breaux was very curt – he barely even told us the name of the wine he was serving!

Even though we found the service off-putting, we did pick up bottles of Meritage and Madeleines Chardonnay. We also took a few pictures around the grounds, before calling it a day and heading home. 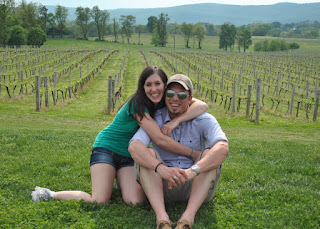 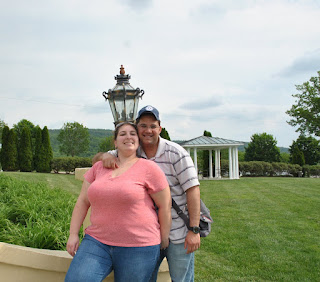 Until Next Time…
Denise and Raul had a great time on their first VA wine tour, and they are already talking about going out again when they visit in the fall. Hurray! Dan and I also had fun. We love walking by our kitchen table and seeing all the fun wines we picked up.

If you would like to find the cache that we hid at Hidden Brook, you can find the coordinates here. I will also post when the cache for Lost Creek is published, so be sure to check back! If you do not know what geocaching is, learn about it in my previous post. 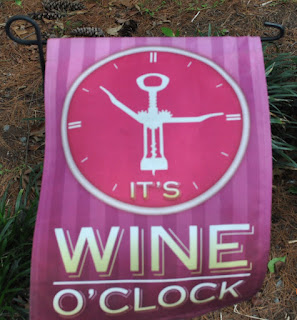