Lisbeth Salander is a Badass 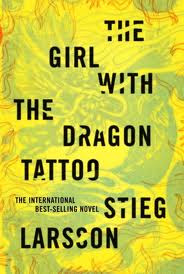 By now everyone has heard of the book “The Girl with the Dragon Tattoo”, but just in case you have been living in a fallout shelter for the last seven years, “The Girl with the Dragon Tattoo” is the first book in the Millennium series written by Swedish author Steig Larsson. The series includes two other books: “The Girl Who Played with Fire” and “The Girl Who Kicked the Hornet’s Nest”. The first book was originally published in Sweden in 2005, and it was republished in English in 2008. Since then, the series has become immensely popular, spreading like wildfire through book clubs and movie studios.

There have been many summaries of these books, so I am going to avoid writing another. Instead, I am just going to point out what I did and did not like, without giving away too many of the fun discoveries.

Because I do not have much time to read, I actually listened to all three books, picking them up on CD from my local library. The audio reader was very easy to listen to. His voice was not boring or annoying, and he made a good effort to give each character an individual voice. If you are not able to sit down and read all three books, the audio version is a nice alternative.

The Millennium series is a fun, suspenseful series that you will read in every spare moment until you are finished. There are tons of interesting, well-developed characters that I either loved or loved to hate. I found the plot to be complex and detailed, which is the most important element of a book to me. Larsson told multiple stories simultaneously without losing the strength of any of them!

By far, my favorite character was Lisbeth Salander. She undoubtedly had some personal faults, and she had an appalling childhood. However, I love how she held onto her standards and morals, and I admire her skill at bringing “justice” to anyone who wished her harm. To put it simply, Lisbeth Salander was Bad Ass. Cheering her on was an unconscious compulsion as I listened to the books.

While I thought that all the books were great reads, I did not like how different the first book was from the second two. All three books contain many of the same characters, but the plot of the first book is extremely different from the last two. This makes it hard for me to see them as a three-book series.

In addition to reading the books, I have also seen both the Swedish and the US movie productions of “The Girl with the Dragon Tattoo”. My personal favorite was the original Swedish version, because I felt that it was more true to the book and that the casting matched my imagination’s depiction of the characters. Another benefit of the Swedish version is that they have already created movies for each book, while the US versions are still in production. However, if you do not want to read subtitles, the US version is still fun to watch.
Posted by Erin at 9:54 AM