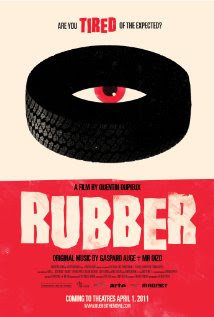 There exists a very strange movie called Rubber. Have any of you seen it? It really does exist. Dan had me watch it recently, and I am still confused about my feelings for the film. My first impression was that the movie encourages stalking, mass murder, and obsession – and yet I felt compelled to watch it until the end.

Rubber is about a tire named Robert. Yes, I said a tire – as in the circular objects which your car rolls around on. This specific tire has the ability to be “alive” and move around of its own accord. This is already sounding strange, right? It gets stranger, just wait.

Robert the tire is obsessed with a beautiful young woman and is following her, while a group of random people follow/watch Robert from a distance. As he is stalking the woman, Robert learns that he has telepathic powers that enable him to blow things up, including any human or animal that annoys him. (This is where the mass murder comes in) Eventually, someone starts noticing all the dead beings, and the cops are called. What happens after this is really too bizarre to attempt describing, so you will just have to watch it for yourself to find out the ending. That’s what I had to do. :)

My expression throughout the movie went from being: 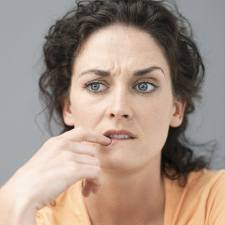 To the look a dog gives you when they see something strange: 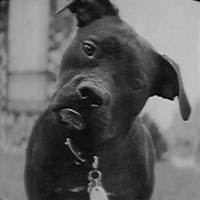 I cannot recommend this movie, because it was too weird. However, I will say that you will experience some very unique emotions while you watch it, and afterwards, you will not exactly regret watching it.

Email ThisBlogThis!Share to TwitterShare to FacebookShare to Pinterest
Labels: movies