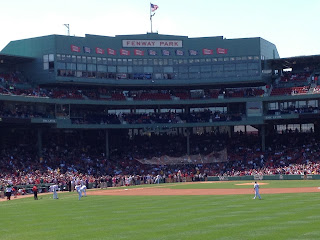 Last year, I wrote about visiting the Nationals stadium in Washington, DC. While I will forever remain a big Nats fan, I decided that I would also show some support for my fiancé’s team, the Boston Redsox. Even if I did not like the Redsox, I would definitely want to visit Fenway Park, which is an iconic stadium to any baseball fan.

During our visit to Boston, Dan and I snagged some tickets to a section behind the Redsox bullpen. The weather was perfect when we showed up for the game – lots of sunshine with an occasional cool breeze.

Before the game started, we wandered through the shops and bars outside. We were able to sneak into the Bleacher Bar, which has a viewing area of the Fenway field from inside the bar, and we loaded up on Redsox paraphernalia at the official team store. I also got a huge laugh when Dan’s cousin got kissed by a giant lobster. LOL 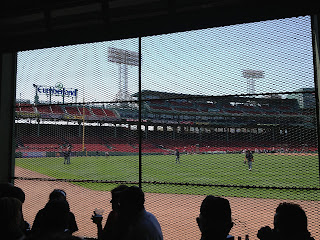 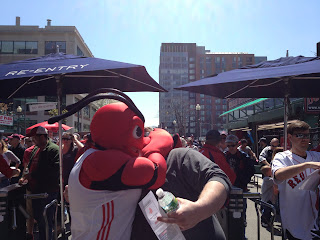 Getting kissed by the lobster 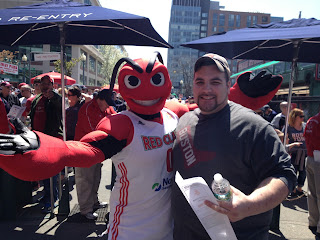 After grabbing a beer, we found our seats and managed to get a picture in front of the field. :) 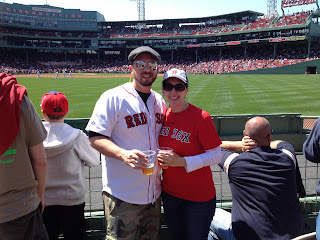 The game itself was a lot of fun. The Redsox won, and the right fielder made an awesome catch at the end of the game! 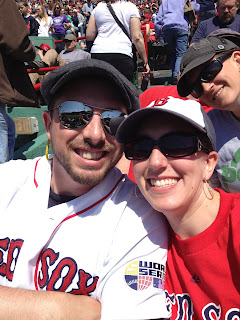