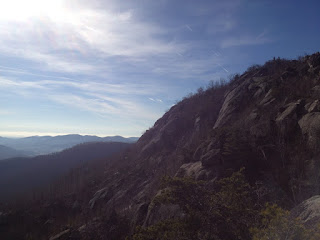 If you grew up in Northern Virginia and are at least a little bit of an outdoor person, you know about Old Rag Mountain. In some groups, it is almost a rite of passage to climb Old Rag.

Old Rag is one of the most popular hikes in the Mid-Atlantic region of Shenandoah National Park. It is long and strenuous, and I do not advise anyone to try it who is scared of heights. Most of the hike is spent zigzagging up the mountain on a steep path, but the last mile or so before you reach the summit is an exciting, scenic rock scramble. The rock scramble is, of course, my favorite part of the hike. I always wish I could ride up to the rock scramble and just spend the whole day hoping from rock to rock along the cliffs. :) 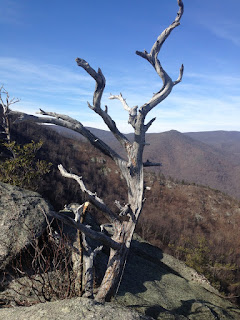 I was about eight when I made my first trip up the mountain. This may be young for some people, but having an arborist for a father, I started climbing things almost the moment I could walk. My next trip was with my youth group in high school. I think this was my best climb, because I was at peak physical condition and could almost run up the mountain. The third time I visited the mountain was just after my 25th birthday. The climb up was still easy, but my knees started giving me trouble on the way down. 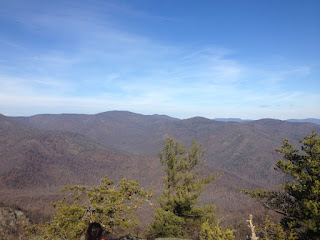 Last weekend, I did my fourth hike at Old Rag and took my fiancé with me for his first visit. This was definitely the hardest trip of all for me, because my knees cannot handle strenuous activity like they used to. However, even with all the swearing and pain, I made it up and down the mountain in 5 hours, including a nice long break for lunch. 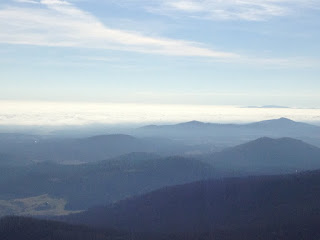 Fog over the easter hills 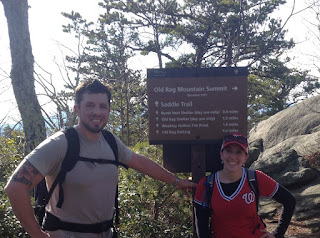 We've reached the top
As always, the best part of the hike for me was the rock scramble. As soon as we reached that stretch of the trail, I forgot all pain and started climbing on anything I could. My favorite memory was catching up with the group of 19-21 year old girls who had jogged up the mountain past us. While they were squeaking and squealing about climbing through crevices, I climbed up around them, hopped over a few boulders, and slid back down to the part of the trail ahead of them. :D It was great! 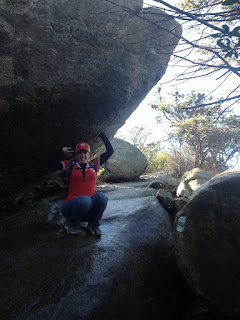 Yes, I am that strong 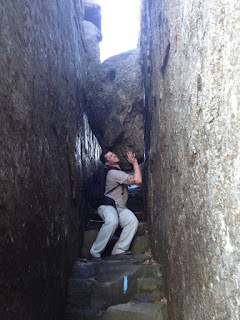 The rock was blocking the path, so Dan was moving it.
If you are thinking of hiking Old Rag, I would recommend that you pack lots of water, some energizing snacks, and light lunch. Make sure you are physically able to walk uphill for a long time, and be prepared to slip off your backpack a few times so you can squeeze through a crevice in the rocks. Also, because Old Rag is so popular, the paths can get rather crowded during peak season, and sometimes you have to wait for a while for a group to go by. 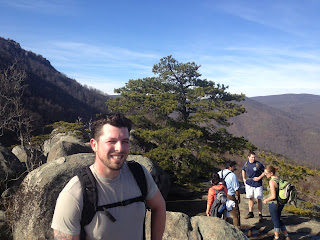 Waiting for another group
Other than that, I would recommend that everyone have a goal to hike Old Rag at least once in their life. It is a fantastic climb, and the views are quite spectacular (as you can see from some of Dan and I’s pictures). Also, there are plenty of good vineyards nearby that are a fantastic way to end your visit. :) 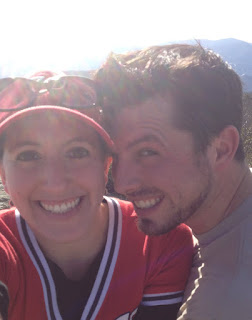 Dan and I looking out from the summit
Posted by Erin at 6:35 AM