I'm the King of New York! 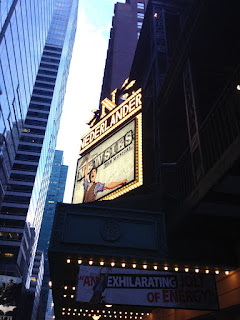 I was in elementary school when I first saw the Disney movie Newsies. It was both love at first sight and eternal love. LOL The music, the dancing, the cute boys with sling shots and newsboy caps – I was hopelessly infatuated, like many girls my age. If you can even partially grasp my love for this movie, you will have a small inkling of how excited I was when I learned that Newsies was going to Broadway!

Sadly, I must confess, that before this recent trip to New York City, I had never been to a real Broadway play. I have been to college plays and small theaters in DC, but never an all-out production like you find on Broadway. Are you beginning to see why I was so desperately wanted to see Newsies?

While looking for vacation packages on TravelZoo, I happened to see a small line of text with the word “Newsies” on it. After following the link, I found myself looking at the most beautiful web page ever. One that said I could get fantastic seats to Newsies on Broadway for a very reasonable price!

The moment I got home from work that day, I brought my laptop, with the page already open, to Dan and declared that I wanted nothing more in the world than to see Newsies for my birthday. :) Dan (being the wonderful fiancé that he is) agreed that it was a great idea and purchased tickets for us. Huzzah!! 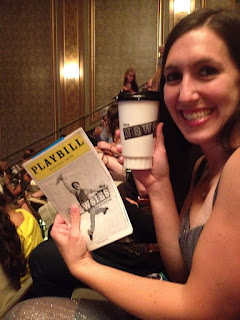 Me ready for the show to start!
It was with great enthusiasm and anticipation that I counted down the days, and before I knew it, we were standing in line to enter the theater. Naturally, I was practically bouncing up and down, taking pictures of all the signs for Newsies and humming the songs in my head. Dan was definitely amused by my antics. Then, the line started moving, and we headed into the theater. 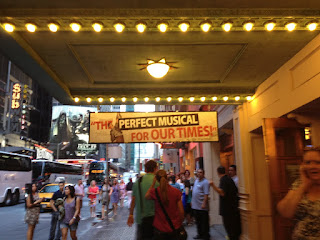 Before I describe how wonderful the show was, I do want to say that the theater itself was beautiful. The walls were covered with wooden carvings and gilded crown molding. The carpets were adequately worn to show popularity and the experienced age of an older, successful theater. I have included a picture below, but it does not do it justice. 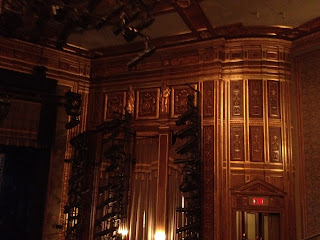 The production itself was fantastic! I reveled in every second of the play, absorbing as much of the experience as I could. The set was simple, affective, and fluidly transformable. The cast had a great balance of talented singers and dancers, and the musicians made the show come to life!

The crowd that night was also fantastic. You could tell that there were many Newsies fans, as well as fans of the actors themselves. You could hear a few people singing along to the songs (not enough to be disturbing), and the cheering that followed favorite scenes and actors was deafening.

My favorite scenes or songs were: 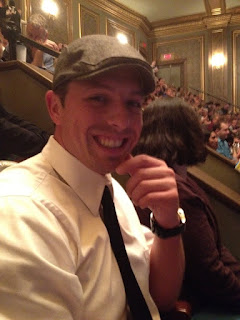 Dan in his new Newsies hat
I did notice a few differences between the show and the movie, and I will attempt to mention them without giving away anything important in the plot. The first thing I noticed was that Broadway show changed some of the words to the songs. Some word deviations were more drastic, but some were very minor. It was a little disappointing that I could not sing along completely. However, I had expected that the words might be a little different.

The next big change to the show was that the reporter’s character had been changed to a girl. This adjustment was one that I really loved. It was nice to have another prominent female character in a mostly boy-based story.

There were a few other tweaks here and there in the story to account for timing and adjustment to the stage, but nothing that hurt the plot or experience. 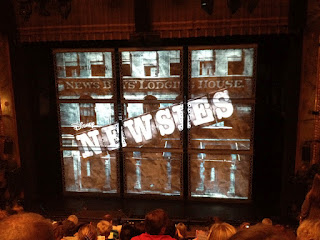 To sum my review up, seeing Newsies on Broadway was the experience of a lifetime! Anyone who loves the movie half as much as I do has to see the show, and anyone who has no experience with Newsies should definitely educate themselves by seeing this production. :) 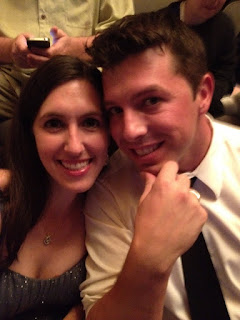 Dan and I at the theater
Posted by Erin at 2:30 PM